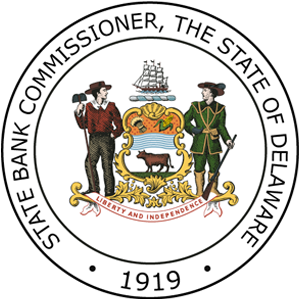 Office of the
State Bank Commissioner

Estimated Franchise Tax Returns are due March 1 of the current tax year and are required from banking organizations or trust companies, as well as out of state federal savings banks with branches in Delaware, with an annual bank franchise tax liability estimated to exceed $10,000.00.

No, our office does not send out payment booklets.

The estimated bank franchise tax payments are due on or before June 1, September 1 and December 1.

The bank franchise tax calculation begins with net operating income before taxes as reported on the December 31  call report.

Yes, the bank franchise tax does include apportionment as provided in Chapter 11, § 1101A of Title 5 of the Delaware Code. In general the bank franchise tax on most banking organizations and trust companies is assessed on only 56% of net operating income before taxes, less applicable deductions. Several deductions are available for income attributable to subsidiaries or out of state or foreign branches that are otherwise subject to tax in Delaware or another state. Other deductions are available for foreign source income. Special provisions apply to out of state banks with branches in Delaware.

In general, the bank franchise tax does not provide for carry-backs or carry-forwards between tax years. However, certain tax credits may be carried forward to future years.

Yes. Amended returns with a balance due are subject to late payment penalties and additional tax due to the underpayment of estimated tax.

No. Tax forms and instructions are no longer mailed out. Click here for Tax Forms and Instructions.

When a bank franchise taxpayer ceases operations in Delaware, a final call report or financial statement and a final franchise tax return are due within 30 days. A change in a bank’s charter or parent company may also require a final statement.

Any questions you have about the bank franchise tax can be directed to Tax Auditor III, Florence Jones at (302)739-4235 or florence.jones@delaware.gov.